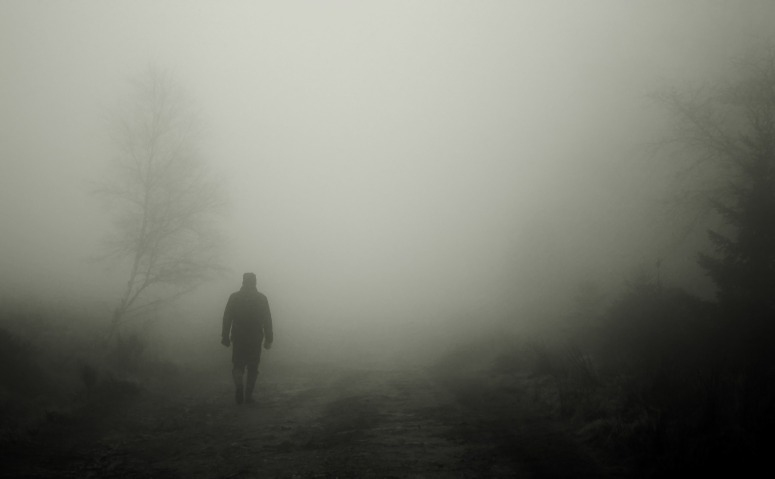 “I don’t want to be afraid of everything all the time.”

I was sitting on the couch looking at that statement, that goal, for the hundredth time.  And just like every time before, I thought that I would never make it to that place.  A place where fear wouldn’t control my life.  Every thought,  every action (or inaction) seemed steeped in fear.  I was trapped in it, utterly consumed, and in my mind and heart, there was no way out of the cage.

That’s what had landed me here.  On the couch.  Trying to keep up the appearance of going to therapy and getting help with this mountain of anxiety and depression, looking for the way out.  So here I was, staring past the beaded teal curtain hanging in the window out to the world that I had just plain given up on.  The world where even making dinner for my children and holding it together until bedtime seemed like an amazing act of courage.  One that I simply did not have the energy to keep on doing anymore.

Across from the couch in the credenza, there surely was a file with my name on it.  Filled to the max with all the labels we had been discussing. Well, like trying to wrap my mind around for my part.  Labels like major depressive disorder, generalized anxiety disorder, panic disorder and avoidant personality disorder (yes, a real thing!)  A lot of different labels to describe the chaos called my life.  Combine that with a sweet, overly energetic boy who knew all too well how to work his big brown eyes and bright smile to work his way out of trouble, struggling with an ADHD label of his own, and I’m not sure any amount of labels could accurately describe the storms raging in my mind and emotions.  ON days that I made it to work without crying, at some point the anxiety and the hamster wheel of churning thoughts would kick in and focusing on much of anything was difficult at best.  Other days,  there would be panic attacks that would strike with little to no warning and steal whatever focus was left!

I had finally reached a point where what would calm me down was thinking and planning for a way out that would undoubtedly work.

Any sense of control was better than none and in my mind, it couldn’t happen soon enough.  I just didn’t want it to fail and end up in a hospital or some institution, where just as undoubtedly, things would get worse instead of better.  So in the meantime, the planning and dreaming of it would calm me.  To know that it was a possibility, that I indeed had a way out of the darkness, offered me a glimpse of calm in the storm.  Not a peace or a fix by any means, but an island in the midst of the raging seas.

It was at this point – the eye of the current hurricane – that I broke down and admitted to a friend the truth of how bad things had gotten.  The painful truth of how desperately I needed out, and how intently I had been searching for it.  When we parted ways that evening, he told me he was less worried about my state of mind that night than he had been (so much for putting on an act!) because I was finally honest –with myself more than anyone else- about how broken I really was.  Followed by an ultimatum of me making an appointment with a therapist the next morning or he would be dragging me himself.

At first, I skipped appointments more than I showed up, until the worse became even worse, and I was told this time that for the sake of my kids and my job that I needed to be more consistent.  So I started going (a bit) more consistently, and I would sit on the couch and crack a joke or talk about my boys or just cry. I would seldom talk though – rarely get to the heart of the matter, and when I did, I would spend almost the entire session building up the courage, only to find it within the last five minutes.  Truth be told though, I was probably waiting for that last five minutes to have a quick “out” when I didn’t want to talk about anything real for longer than that.  While she never would admit it, I think it drove my poor therapist crazy.

Little by little and over long stretches of time, things started to come out.  Usually with writing though. (I thank God daily for the invention of text messaging!) One day she asked me if I ever felt like I was disassociating. Of course I had no idea what that actually meant in real life and she described it to be like those times you’re driving home from work and you remember leaving the office and turning out of the parking lot, but then the next thing you know you’re in your driveway with no real memory of the drive home.  You obviously drove your vehicle safely from point A to point B, but on auto-pilot.

Up ’till then, I didn’t realize that what I would describe as escaping reality, actually had a name.  I had heard people describe it as being in a fog, or just not present.  Whatever the description, that’s how it was.  Not connecting,  not being able to engage.  No hope or joy was to be found in that place.  And it absolutely described how I felt.  Not once in a while, but how I got through most of my daily life, because when I was present in the here and now was when the panic and anxiety would become overwhelming.  So much fear trapped within me that I couldn’t see past it.  To be honest, I didn’t really want to try at that point either. Trying to manage two jobs, an extremely chaotic family life, and navigating the panic attacks intermixed with the relentless thought of suicide, it was just too much.

But that’s where God found me…

It wasn’t as if God had lost me or misplaced me.  But by then, I had become pretty accustomed to running away from Him.  I’d been doing the dance for years.  The one where I would come back because I couldn’t take it anymore, but only far enough to come back into the doorway.  Real surrender sounded good and all, but it was out of the question because it simply hurt too much.  I was convinced that God didn’t really want me anyways, always felt like I was on the outside looking in.

But that’s not where He left me…

This site uses Akismet to reduce spam. Learn how your comment data is processed.