I thought my recent experience was an ending.  A point where I finally got to see a piece of what God’s been actually doing in my life.  A revelation of how my misperceptions at a fundamental level have colored and impacted every area of who I am. 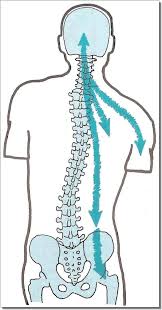 Come to find out, it was — but I think in God’s eyes it was also a starting a point.

The point where He would start aligning everything to His truth instead of my poor, misguided, twisted version of it.  I thought that the panic attacks, the depression that had resurfaced would go away after the amazing truth of my worth in God’s eyes reached my heart, and yet, it only seemed to intensify.  Until once again, I was clued in to what He’s doing, what I’m signed on for.

When your hip is out of place, out of whack, it can throw off your entire spine alignment and impact how your nerves and arteries function down your leg.  It forces other parts of your body to compensate for this one area not being able to work properly.   And if you address the misalignment in your spine or neck, the tension in the muscles, or the nerve issues in the leg while your hip is out – none of the other really lasts, because the problem is still there.  But once that correction has been addressed, your hip and lower back are back into place — you can start addressing the damage it caused in other areas of the body.

That one lesson about being worth enough to have a purpose in life, putting that into place, has only managed to highlight all these other areas in life that have been tainted by that belief that somehow God just has me wandering aimlessly.   All those fears I wrote out, all the excuses that have been in my head for the majority of my life, that hold me back, it’s time to address those.  REALLY address those.  Because God doesn’t do the superficial.  And to address them, I have to deal with them on a whole new level.

Depression.  Anxiety.  The suicidal thoughts.  The feeling less than good enough.  The feelings of loneliness and isolation.  All of my thinking that’s been responsible for that, those faulty beliefs.  When that source was addressed, everything else began to shift and all the cracks were easier to see. I’ve been praying about wanting for all the emotions to stop, but the way out is through.  It’s in the letting the thoughts and emotions continue to become adjusted according to God’s truth that brings the deliverance.  However much it hurts.  The parts that are damaged need to fixed, even if that means everything what healed crooked in the past.

And so, going back into the depths of the depression, Back into the fogginess of anxiety, is a good thing this time.  I know I’m not there alone.  I know I’m there with a purpose… Because I’m stronger this time -because God’s been working in my life to make me that way, to teach me how to trust in His strength instead of my own. It means God’s still working and He’s going to address every one of those issues and excuses and fears He showed me just a few short weeks ago.  It means I can trust in His plan. And it means that he’s answering my prayers, the ones where I ask Him to give me the capacity to follow Him. He’s getting rid of the junk to make that room.

One other lesson…I’m an emotional creature….. Always have been.  I’ve spent some time hating that about me.  Hating that my emotions have always seemed so big.  But not anymore.  I think they’re there for a purpose. Not for the emotions to rule my life or for me to live according to how I feel, but because I’ve experienced these moments where I know my emotions are OK, but it’s been almost as if God’s given me this glimpse into a few people’s lives by giving me insight into their emotions…and each time it’s happened it’s been when 1) my emotions are relatively stable and 2) when I hit a wall and ask God for help because I no longer know how to pray for someone, that it happened. I know it sounds strange, but it’s seriously the coolest thing I’ve even experienced…to be able to understand how someone is feeling and pray for them like that…and at the same time be so aware of the presence of the Holy Spirit making that even possible…it’s truly phenomenal.  So maybe to keep growing… I need whatever else is in my heart that hasn’t been molded…just to let that happen…

The major crazy panic attacks are all my fault.

If God is working.  Then the panic attacks are my fault, I’m causing them.

We know that God isn’t about chaos.  And that’s exactly what the panic attacks are.  Chaotic. Destructive. Scary. Draining.  Those are happening more and as big as they are, because of me.

There’s a close connection between emotions and physical ailments.  It’s why we can get backaches and headaches when we’re stressed, or why insomnia can cause or exasperate depression.  So it makes sense that while God could be saying its time to deal with some more buried, suppressed emotions in a healthy way and be done with them, I could be back at my old habits trying everything to knock these crazy emotions back down, which results in this unresolved, unhealthy emotional energy manifesting in another way in order to process out — i.e. physical panic attacks.

Which means, they don’t have to happen… it means I can choose to listen to God and take the time to spend with Him and pray through whatever is going on instead of running away until I physically get stopped by a panic attack.

It means, that, as always, God is still God.  He still knows what in me needs fixed and when.   And it means, that He’s powerful enough to cure whatever ails us.

One thought on “Chaos into Order”

This site uses Akismet to reduce spam. Learn how your comment data is processed.